The Steilacoom Historical Museum Association owns and maintains three historical buildings in the Town of Steilacoom.

The Bair Drug and Hardware Store 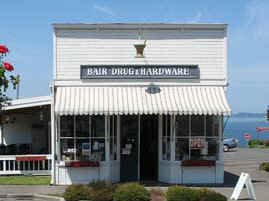 was built in 1895 by pharmacist W. L. Bair. Built on Lafayette Street near the terminus of the electric streetcar, it quickly became the social center as residents settled themselves around the pot-bellied stove, waited for the streetcar, and came in to have prescriptions filled. The soda fountain was installed around 1906, about the same time the addition was put on the back of the building to accommodate the post office and house the hardware stock transferred from the old E. R. Roger’s store.   The store and the adjacent half lot were donated to the Association in 1973 by Eudocia Bair Leech and Godfrey “Cub” Bair in memory of their parents Hattie and W. L. Bair. As the only commercial building predating 1900, it had great historical significance. Tremendous effort over a two-year period to restore and shore up the existing building culminated in a Grand Opening during the nation’s Bicentennial. The decision was made to lease out the store for a restaurant and still maintain a “Living Museum.” Through the years the store has had additions to make it more usable and many, many restorations.

The Nathaniel Orr Home and Orchard 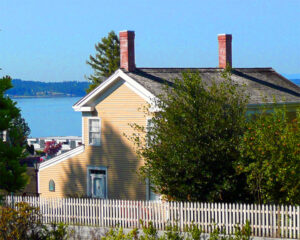 was placed on the National Register of Historic Places in 1972. Built in 1857, the house is a rare example of a two-story vertical plank-box construction. Coming from Virginia in 1852, Orr built the structure, originally using it as a wagon shop. When he and Emma Thompson were married in 1868, the house was turned into a home. The half block with the house, the wagon shop, and the outbuildings surrounded by the orchard of pear, apple, plum and cherry trees depict the early Puget Sound pioneers’ way of life.   The property was purchased for $40,000 in 1974 from Nathaniel’s surviving son Glenn when he was 93. The majority of the original furnishings date back to 1868, and some crafted by Nathaniel, were given by Glenn and his wife Bertha as a gift in memory of his parents, Nathaniel and Emma. Major restoration was accomplished in 1979 with a matching grant through the Office of Archaeology and Historic Preservation to paint the exterior, install insulation, build a picket fence around the property, and restore the lower floor. Layers of wallpaper were removed and the walls painted their original color of gold. Wallpaper was reproduced by Scalamandre in New York to match the original paper in the parlor. In 1990 the mortgage on the property was burned with much celebration.

In the early 1990’s realizing that the building needed major restoration the board moved forward to have a foundation built. During the process the building slipped from its temporary foundation and dropped to the ground. After much deliberation and time the Nathaniel Orr Pioneer Home Site was approved by the Board. The plan included restoration of the house with usable space underneath and museum facilities at the corner of Main and Rainier. Monies were received from a variety of sources, with major funding coming from the Washington State Historical Society and Save America’s Treasures Historic Preservation grants. The house was completely restored and the museum put in full operation. 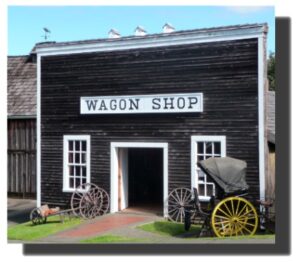 was built around 1870 shortly after Nathaniel had changed his previous shop into a family home for Emma. A picture shows him standing in front of it in the early 1870s. It was an active workshop with a blacksmith shop at the back for many years. In the 1930s it served as a gas station and the old Shell sign can still be faintly seen. During the late 1940s two men who had returned from WWII used it as a boat building shop. By the time the Association gained ownership it had fallen into complete disrepair, with standing water, mildew, and decaying boards. In 1993 the building was completely rebuilt through generous donations and fund raising. Today it is a popular destination with its hands-on​ activities.