Captain Lafayette Balch, a Maine sea captain, founded Steilacoom in January, 1851. Originally he called it “Port Steilacoom.” A few months later John B. Chapman took a donation claim to the west, naming his town “Steilacoom City.” In 1854 the new territorial legislature incorporated “Steilacoom” combining the two rival towns into one. They were joined by Union Avenue.

Steilacoom was known as the “town of firsts:”

First Soap Factory in the Northwest - 1864

As time passed, Tacoma took over Steilacoom’s place. The county seat moved to Tacoma when it became the terminus of the Northern Pacific Railroad. Many of the businesses along Commercial Street moved to the bigger town and the population dwindled.

​With the introduction of an electric railroad running between Steilacoom and Tacoma in 1891 Steilacoom became known as a tourist destination. Prominent Tacoma businessman built summer cottages looking out to the water and commuted back and forth while others came to enjoy the view and stay a day or two.

In 1914 the town was torn from the beach as the Northern Pacific Railroad was built along the waterfront and the cottages were either torn down or moved. With the advent of the car, WWI, and the Great Depression, Steilacoom again became a sleepy town. Awakening in the 1940s with the proximity to an expanding Fort Lewis and McNeil Island Penitentiary, houses were constructed to accommodate the growing population. In 1940, the population was 823 and in 1950, 1233. During the 1950s Steilacoom celebrated four centennials commemorating its many firsts in the territory.

Enjoy this video about Steilacoom and its history, created in 2016 by students at Steilacoom High School: 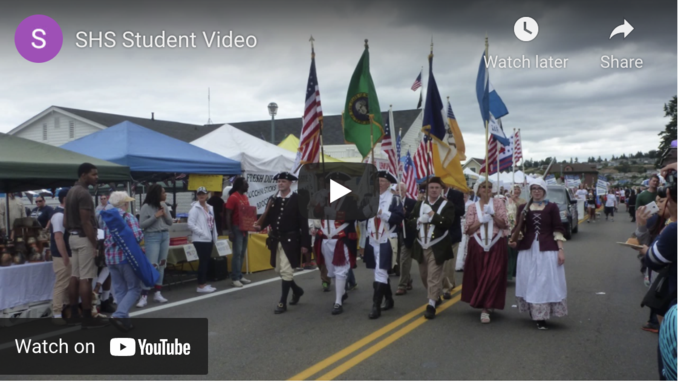